During the last Lucca Changes 2020, many exclusive contents of exquisite workmanship were created.

Among all the broadcasts, the specials and the various live broadcasts, we are very pleased to report these three documentaries that see the protagonists of the great friends of our Area Performance.

Paolo Barbieri and Ciruelo on Raiplay:

Italian public TV and radio took to the field to support the great event dedicated to comics and games. Side by side, like the protagonists of our favorite sagas, in the challenge of the millennium. During the week of the festival, the group’s editors offered insights, specials, unpublished videos, and many other proposals within their schedules to enjoy the cultural contents of Lucca Comics & Games – Changes edition, from the comfort of home.

Rai Radio2 was the official radio of the Changes edition, with interviews and direct links with the protagonists of this edition. RaiPlay has dedicated an entire section to Lucca Comics & Games with an offer made up of exclusive originals, specials of Rai 4, Rai 5, Rai Italia, Radio 2, and a special selection of the best proposals for films, TV series and insights dedicated to pop culture fans.

Here are the two starring “our” Ciruelo and Paolo Barbieri:

Ciruelo: a life in Art – The life of the master of dragons 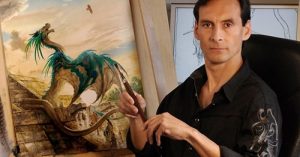 Ciruelo is a lover of nature and never misses an opportunity to represent it in his works, appreciated and exhibited in various cities in Europe, the United States and South America. Internationally recognized as the Master of Dragons, the artist impressed the general public with his “Petropictos”, works in which he has brought his powerful “high fantasy” suggestions directly to stone. From Argentina to Spain, passing through Lucca Comics & Games, this documentary tells the extraordinary life of the fantasy illustrator.

Masters of the fantastic – The story of “fantasy” illustrators 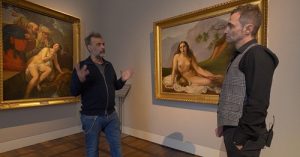 Today, artists who deal with fantastic art for publishing are called illustrators. But the definition does not matter: Italian and international “fantasy” illustrators are the heirs of a long tradition that has shaped centaurs, dragons and sirens over the centuries, the same tradition that has seen the exploits of illustrious predecessors such as Bosch, Blake, Dalì, Rossetti and many others. Luca Beatrice, art critic, and Paolo Barbieri, fantasy illustrator, talk about the arts while walking in the evocative rooms of the GAM in Milan.

The entire RaiPlay offer will be available on demand until February 28, 2021.

The specials went online not only on RAI channels, but also on the Lucca Changes Youtube channel.

Inside the Laberinto Gris with Luis and Romulo Royo:

An exclusive tour of the studio of one of the giants of world fantasy, Luis Royo who with his son Romulo founded the art studio Laberinto Gris, in Zaragoza. Between masterpieces of the past and juicy previews of future projects, Luis and Romulo will lead us to discover their creative processes, from the idea, to the project, to the realization.