On May 1, 2021, an article in which the importance of comics as an educational tool appeared on the pages of The Lancet, the most authoritative medical journal at the international level. 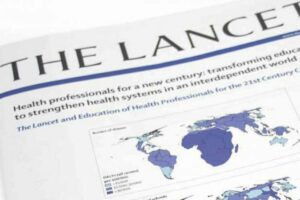 The article, which you can read above, is inspired by the use of comics as a method of combating racism, subsequently extending the concept to various important aspects of medicine, health education and health promotion.

All this confirms the right vision that in 2009 led Renato Genovese, Emanuele Vietina and Doctor Raffaele Domenici to create the project “Il Giornalino della Pediatria“.

A collaboration between our Area Performance Association, Lucca Crea and the pediatric ward of Lucca that has allowed us to create a path dedicated to “informed awareness”, which had already begun between 2004 and 2007 with the Gugo and Guga books by Studio Genovese.

How can we evaluate the educational importance of comics?

As an easily recognizable narrative form, comics represent a powerful tool in education, can contribute to a growth of critical consciousness and can represent a stimulus for deepening and reflection on various themes, be they social, health, ecological, etc. .
By combining textual and visual elements to create the narratives, the comic briefly communicates information and evokes emotional responses, balancing lightness and seriousness.

The immediacy with which it involves the reader forces one to confront the topics, the characters, the story; however, since the interpretation of the images is left to the viewer, it creates opportunities for personal interpretation and interpersonal comparisons.

It has long been recognized in medicine as a useful tool for its ability to represent the experience of the disease, to promote health education, health promotion, informed awareness.

How did the Pediatrics newspaper project come about?

The project was born from the need to contribute to soliciting the attention of children, with an immediate and easily accessible tool and language, on issues related to health promotion and informed awareness of choices and behaviors, to raise awareness on how to take care of itself, to increase well-being and prevent pathologies.

The stories have the same protagonist to maintain narrative continuity and are dedicated to the most important themes of prevention, to lifestyles to inform and help children take care of their health.

Not everyone still knows that the onset of the main and most disabling chronic diseases can be completely avoided or long delayed, paying attention to some determinant health risk factors, such as smoking, alcohol, sedentary lifestyle, incorrect diet, substance abuse, failure to comply with hygiene rules.

What does it mean to publish an article like this in a major magazine like The Lancet?

The Lancet is one of the most important international medical journals. The publication of a work like this is also the recognition in the scientific field of the fundamental importance of comics as an educational tool, but also as an element of reflection and discussion on even broader and deeply felt issues, such as the disparity in access to care. and the lack of equity in health care, also different according to ethnicity and cultural level, topics addressed in some comics taken into consideration in the article.

The conclusion of the work underlines how the educational action of comics can help develop a path towards justice and equality within medicine and health care.

The project, of which you can find all the numbers here, continues today and indeed in recent years, thanks to the collaboration of the North-West Tuscany ASL, it is starting to expand throughout the Tuscan territory.