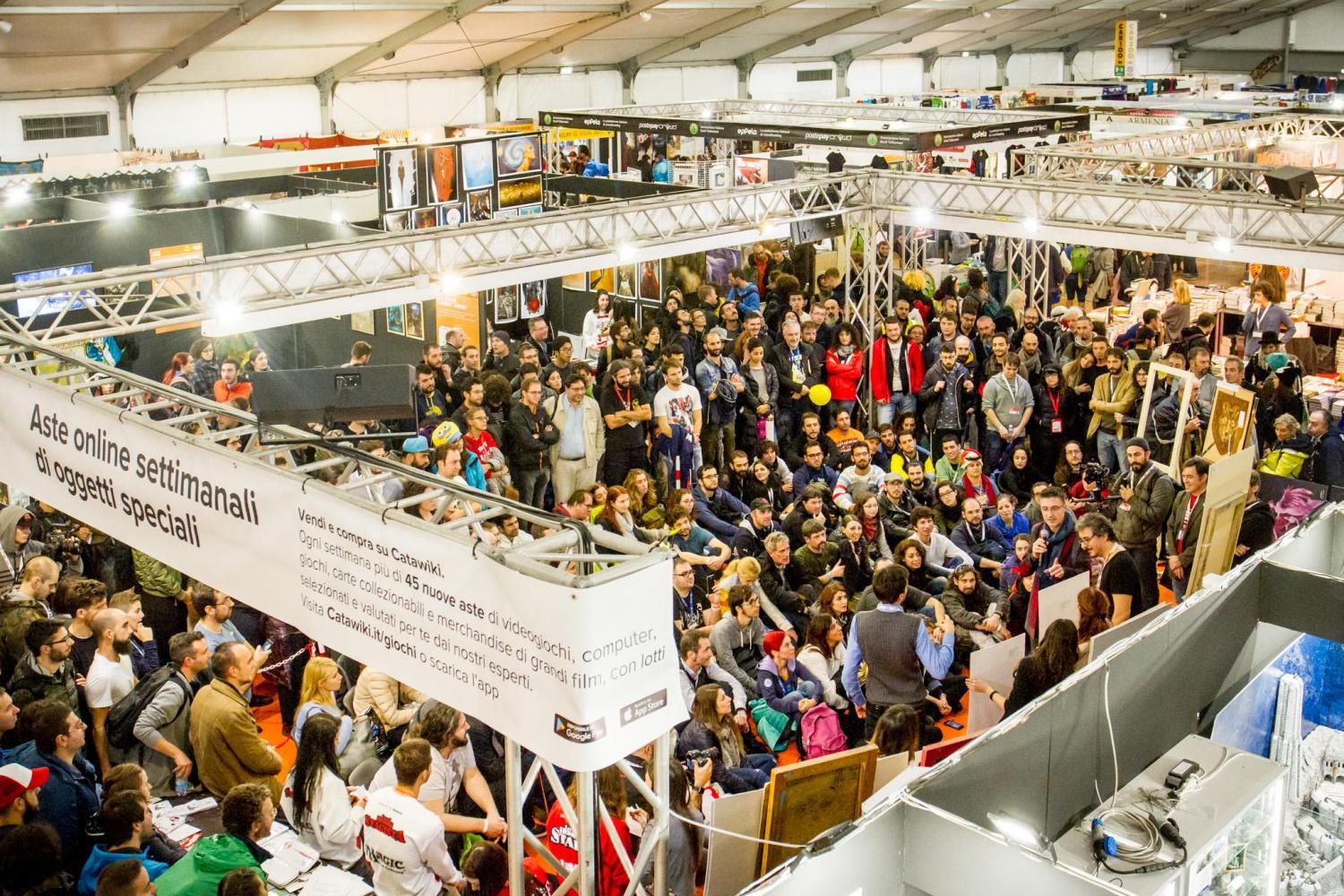 Friday 4 May: appointment with the charity auction on Catawiki for the Pediatric Center in the Mayo refugee camp in Sudan.

On the occasion of the twentieth anniversary of the ONLUS, Area Performance offers original tables of great artists, cartoonists, fantasy and science fiction illustrators from all over the world in a charity auction.

All the works were carried out on the occasion of Lucca Comics & Games 2017 and the proceeds will be donated to the Pediatric Center in the Mayo refugee camp in Sudan, a few kilometers from the capital Khartoum.

The structure offers care for children up to 14 years of age and was opened in 2005 by Emergency after a year of commitment and work in the area. Nonetheless, conditions within the camp are on the verge of survival.

According to the ranking of the United Nations Human Development Index, Sudan ranks 167th out of 188 countries due to armed conflicts that threaten the country’s security, continuous migration, poverty and conditions of child malnutrition. 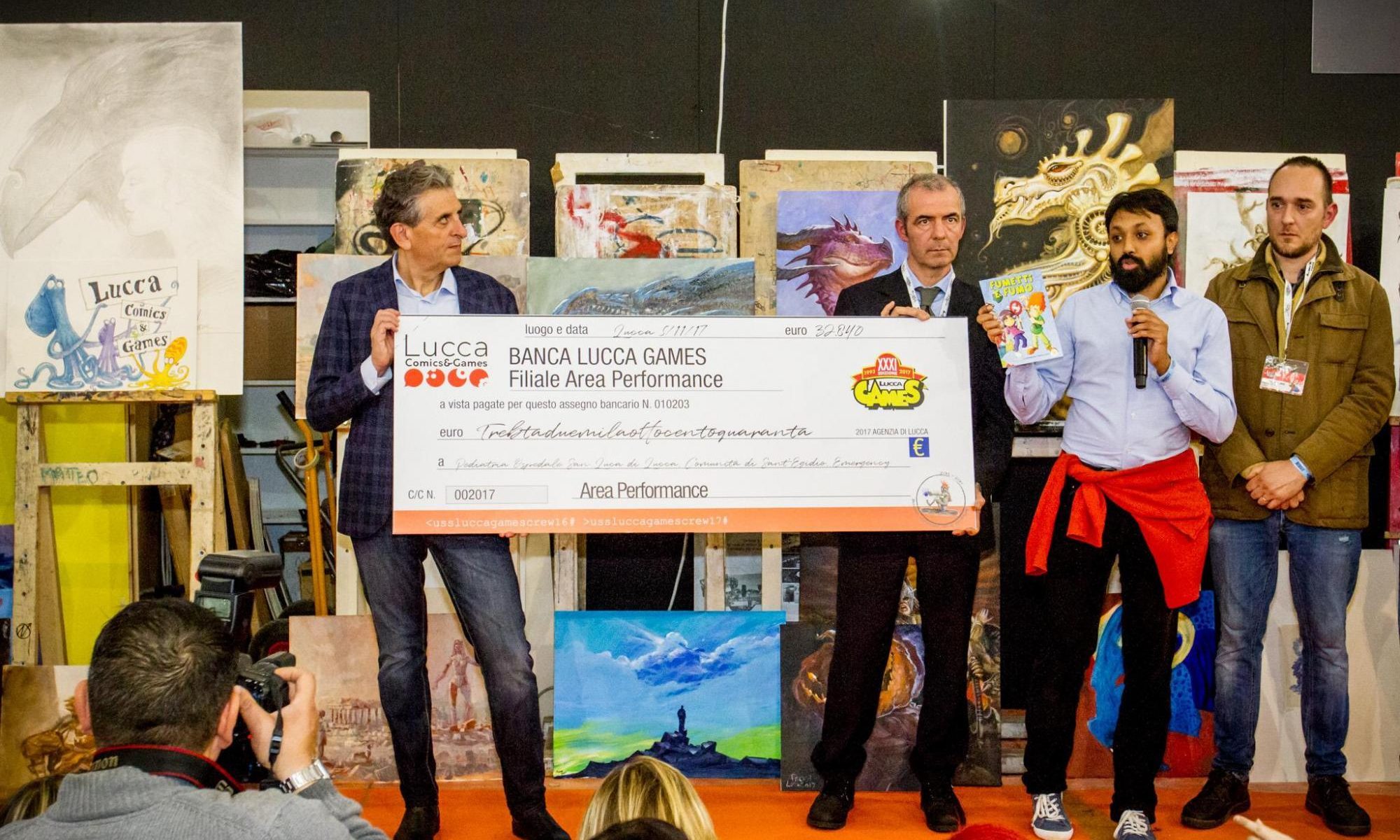 An extremely positive result for Area Performance ONLUS at the end of Lucca Comics & Games 2017: around 85 works were made by artists, cartoonists and fantasy and science fiction illustrators of international renown.

The auction took place in the presence of the Mayor of Lucca Alessandro Tambellini, of the Vice-Director of Lucca Comics Emanuele Vietina and of hundreds of spectators, which led to a collection of € 32,840 which will be given to charity.

The proceeds will be donated to Emergency and the Community of Sant’Egidio. Like every year, the comic was created for the pediatric ward of the San Luca Hospital in Lucca which this year addressed the issue of vaccines.

In addition, during the event, the € 12,000 check was delivered to Dynamo Camp, as part of the proceeds from last year’s charity auction. 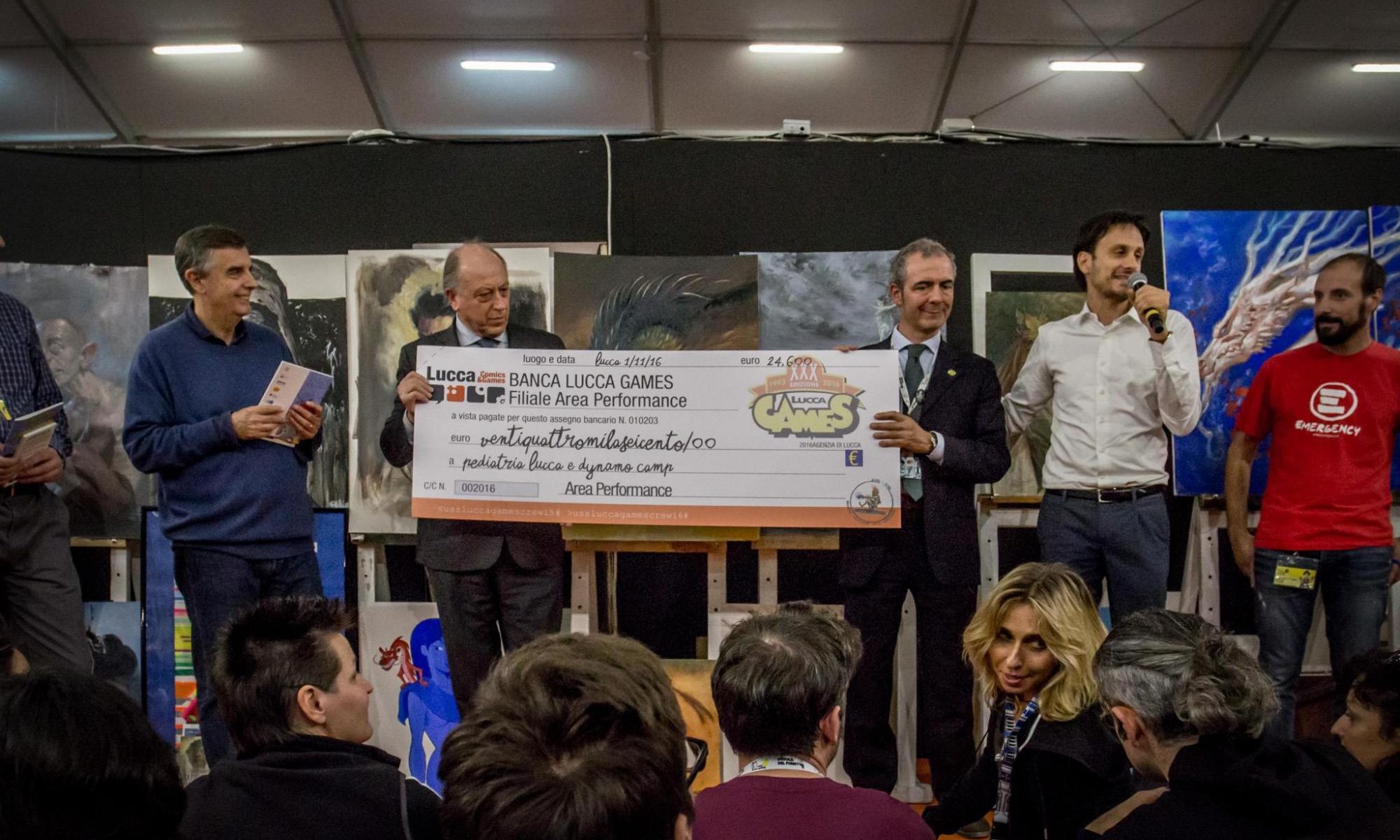 Lucca Comics & Games has a long history of beneficial activities behind it that have intensified in the last ten years, becoming a regular appointment within the event.

In fact, every year it reserves to the Onlus Area Performance association, a space in which the greatest fantasy artists are involved in a 4-day live painting show.

This year 50 artists have donated their works which have been sold to collectors for a total of 24 thousand euros, donated to charity to the pediatric ward of Lucca and to Dinamo Camp. In addition, this year, Lucca Games will also help Emergency and the Community of Sant’Egidio.

There were works by Emanuale and Federica Manfredi, Giuseppe Del Luca, Francesco Francavilla, Linda Cavallini, Gabriele Stazi, Emanuela Lupacchino and many other emerging and already established artists. The Disney designs by Giorgio Cavazzano, Marko Djurdjevic and Antonio de Luca and Lucio Parrillo have had great success, but above all Lucio Parrillo, whose works by the Lord of the Rings were sold for 1,700 euros.

The proceeds from last year’s auction amounted to € 24,600, and were presented with a symbolic check to the mayor of Lucca Alessandro Tambellini, to the pediatric chief Raffaele Domenici, together with the president of Lucca Comics & Games Francesco Caredio and the co-director Emanuele Vietina. 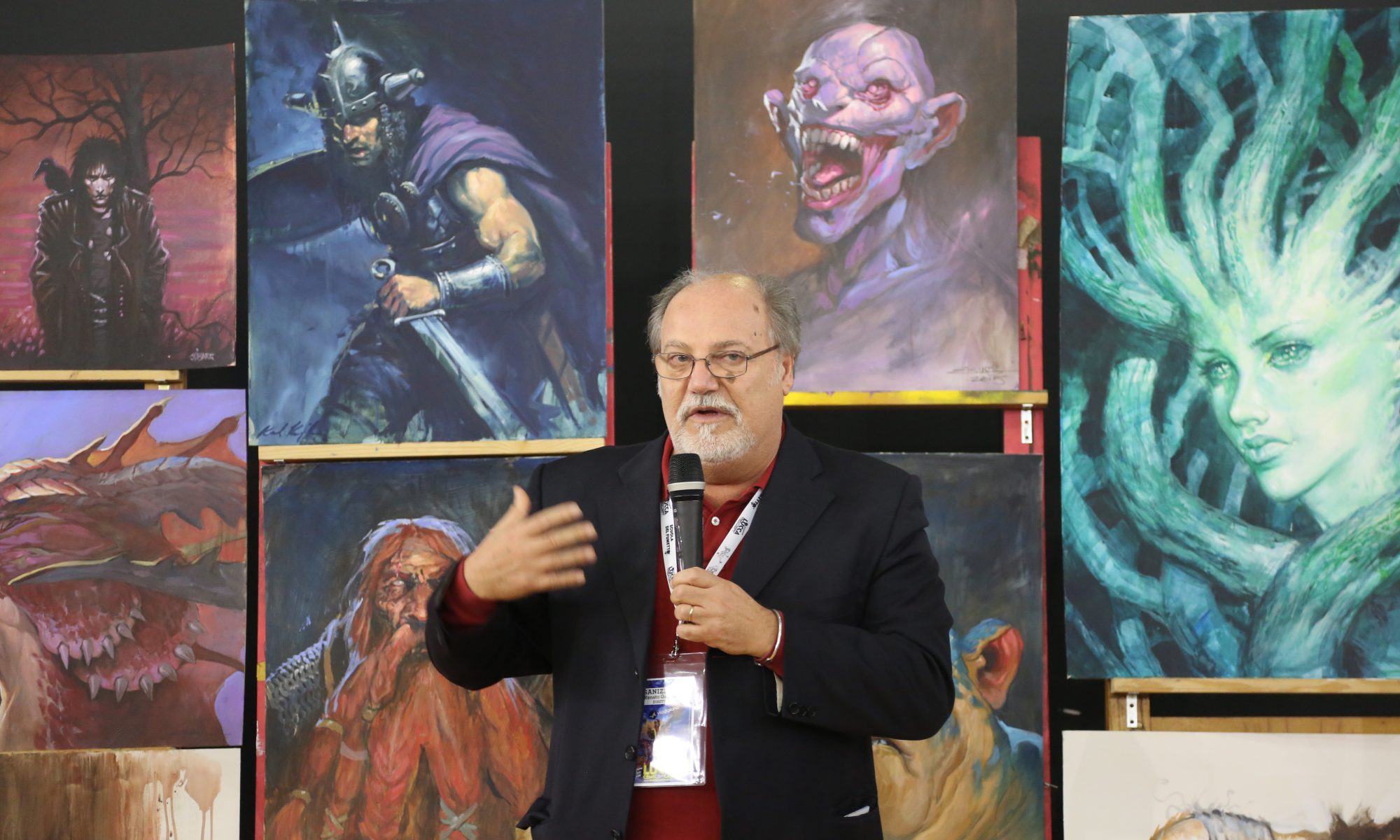 45 Italian and international artists took turns in the Performance Area during the four days of Lucca Comics & Games creating 56 paintings offered for sale in a charity auction.

On the occasion of the preview of the film distributed by 20th Century Fox on Peanuts, the artists paid homage to him and thanks to their precious work and the generosity of the buyers, Onlus Area Performance managed to raise over 25,000 euros.

This sum will be used to finance Dynamo Art Factory, one of the special projects implemented by Dynamo Camp, the first Recreational Therapy Camp in Italy for children and young people with serious and chronic diseases.

Like every year, the auction opened with the donation of the published comic, in collaboration with the International Comics School of Florence and the Pediatrics department of the S. Luca Hospital in Lucca.

The comic book aimed at creating pathways of informed awareness for young patients has the theme of compulsive crises this year, then developed by the screenwriter Manfredi Toraldo and illustrated by the artist Alessandro Giampaoletti. 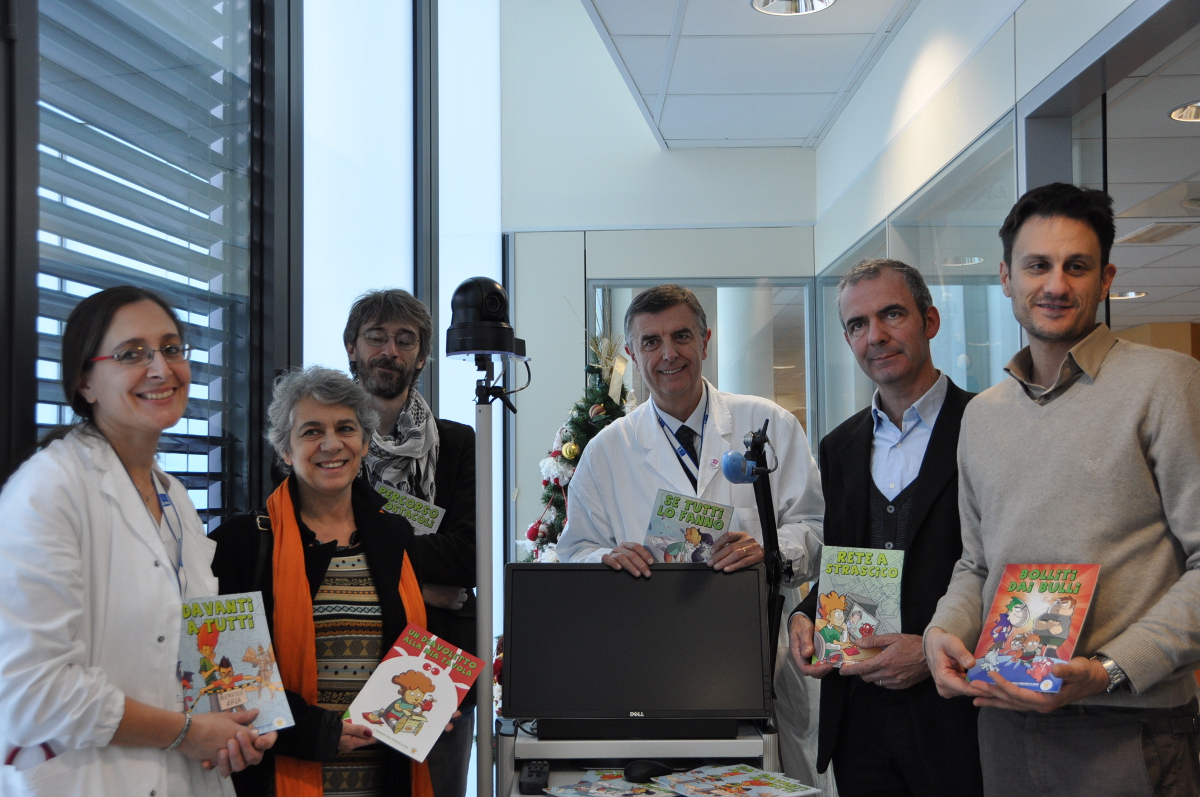 The pediatric ward of the Lucca hospital can now count on a cutting-edge tool for the care of children. Thanks to Lucca Comics & Games and the Area Performance Onlus Association, a modern electroencephalograph was purchased.

Every year Lucca Comics & Games reserves to the Onlus Area Performance Association a space of 100 square meters in the Games Area where the volunteers organize a four-day live painting show that over the years has had the greatest illustrators of the fantastic as protagonists, including Brian Froud (Dark Crystal), Alan Lee (The Lord of the Rings) and Ian McCaig (Star Wars). It ends with a charity auction in which the public wins the works with increasingly generous donations from year to year.

The proceeds were entirely donated to the pediatric ward not only for the acquisition of the electroencephalograph, but also for the creation of cartoon stories year after year aimed at creating pathways of informed awareness for young patients. This year, the sixth issue was reached with the book “Davanti a tutti”, written by Manfredi Toraldo and illustrated by Simone Paoloni, who tackles the issue of the importance of breastfeeding with the language of children.

Lucca Games, the section dedicated to the intelligent game of Lucca Comics & Games has raised 20 thousand euros to be allocated to charity. At the end of the international festival, this year, through the Performance Onlus Area, it raised funds with the auction of the original works that 20 artists from all over the world have created live: a total of 61 paintings made available to the public collecting the record figure of 20,115 euros.

In the presence of Senator Stefania Giannini, the mayor of Lucca Alessandro Tambellini, the president of Lucca Comics & Games Francesco Caredio and the coordinator of the Games area Emanuele Vietina, the chief of pediatrics dr. Raffaele Domenici has announced that thanks to the funds raised last year, a new machine will be purchased that is useful to the Lucca pediatric ward.

In addition, for the next 3 years, there will be an annual publication developed with the International Comics School of Florence of a cartoon of informed awareness “Bolliti dai bulli” (written by Manfredi Toraldo and illustrated by Laura Romiti), intended to help children.

From this year the funds raised on the basis of the activity of the artists of Lucca Games will be destined for new solidarity projects in favor of non-profit organizations and associations (scholarships or publication of educational materials), useful for raising awareness on the issues of health, energy saving and social equality.

At the invitation and reflection of Senator Giannini and Mayor Tambellini, it was stressed how important it would be that this significant proceeds be invested in actions aimed at enhancing the new talent, creating excellent opportunities for those who come from less well-off social groups. 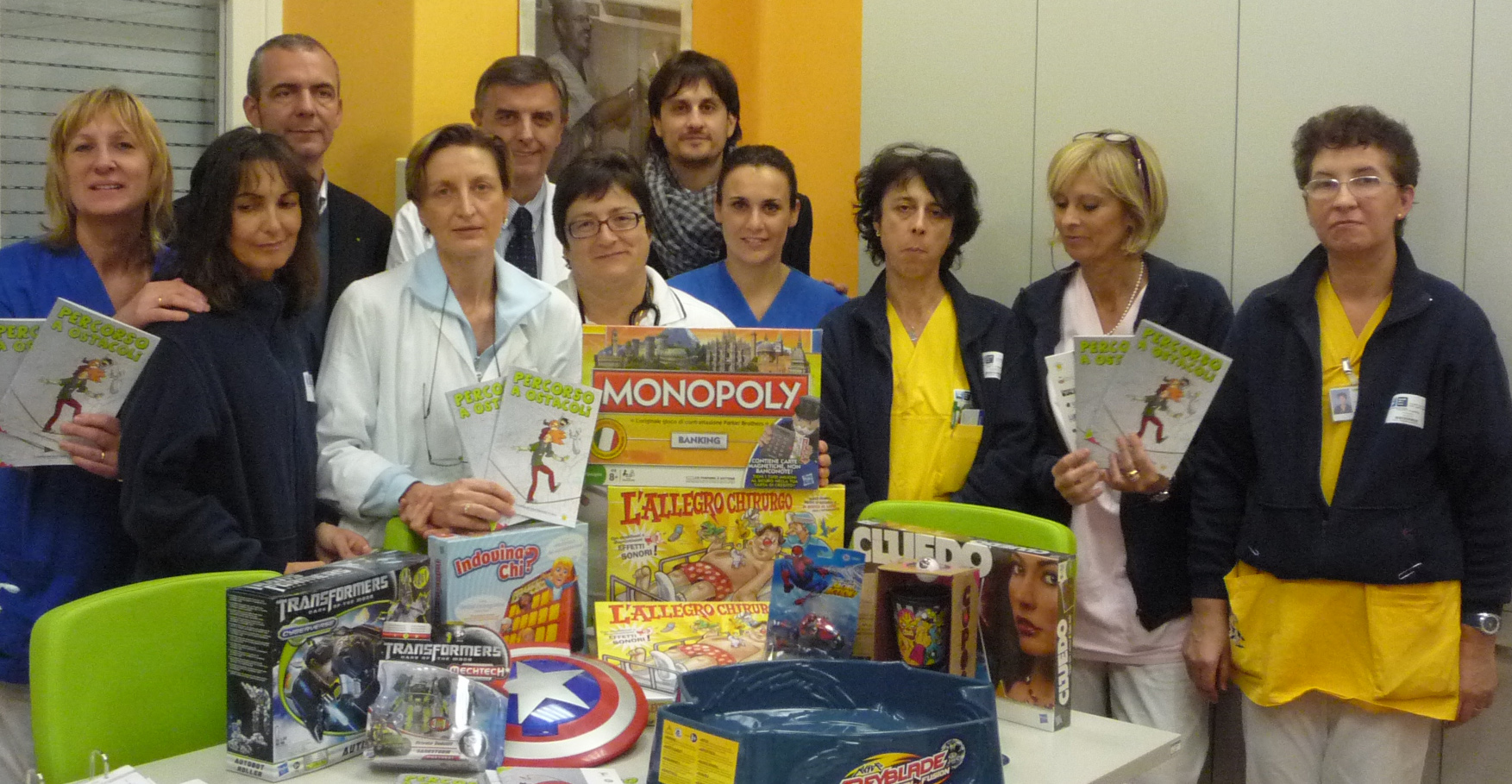 Lucca Comics & Games invites artists from all over the world every year. During the festival these artists create great masterpieces which are then auctioned on the last day of the event.

The Onlus Area Performance association, which for years has collaborated with Lucca Comics & Games in the management of the charity auction, delivers the proceeds of the charity initiative to the Pediatric Department of the Hospital of Lucca.

This year the famous publisher of the game and toy Hasbro has joined this solidarity initiative, donating numerous games (from “Monopoly” to “L’Allegro Chirugo” to “Trasformers”) suitable for young and very young patients in the ward Pediatric.

The proceeds from the auction held at the Lucca Comics & Games 2011 edition were extremely surprising, reaching a record € 17,790.

Part of these proceeds, as in recent years, will be used for the creation of a comic strip which, with the language of young patients, deals with very useful issues related to the prevention of diseases and correct lifestyles. The register will be created thanks to the collaboration between the Pediatric Department and the International School of Comics, and will make use of professional authors.